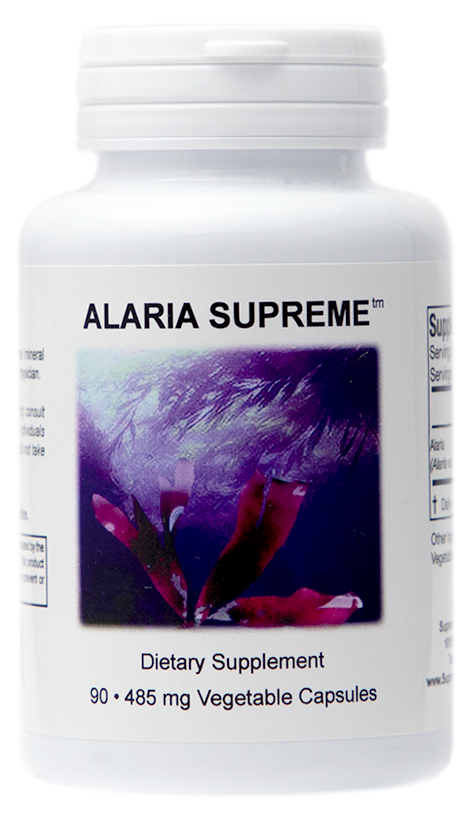 Alaria Supreme™ is a certified organic, wild crafted seaweed that tests free of both mercury and cadmium. Seaweed has many healthy properties, but many people aren’t able to tolerate it well due to mercury or other heavy metal and toxic chemical contamination. Each batch of our alaria is tested to make sure no contamination issues exist.

Alaria has a great nutrient profile. Two capsules will give you your RDA of organic iodine as well as smaller but significant amounts of most vitamins and minerals. It has the most significant amounts of calcium, magnesium and B-vitamins of any edible seaweed. Being a whole food ground into a powder it has all the co-factors, phyto-nutrients, etc. you would expect to find in a “superfood” without the downside of the algae, grass juices, alfalfa, etc. which are common allergens.

Coming from the sea, Alaria is a rich source of organic trace minerals in a form that is very easily assimilated. No land plant can compare.  Iodine deficiency is commonplace and land plants typically do not supply the amount of iodine needed to meet our needs. Inorganic iodine added to table salt is not an ideal form.

Alaria, as do most seaweeds, inhibit cancer cell growth in animal studies. It is considered anti-mutagenic, and anti-tumor [1]. It is postulated that the low rate of breast cancer and lung cancer in Japan (despite the high rate of smoking) is due to seaweed consumption [2]. Seaweeds can lower serum cholesterol levels as well as blood pressure and help remove arterial plaque as well as decrease platelet stickiness [3]. Alaria and certain other seaweeds can also lower raised uric acid levels and can be anti-bacterial, anti-fungal, and anti-viral [4].

Alaria can be very effective in preventing damage due to radiation exposure from power plants, nuclear tests etc. (This radiation can virtually travel around the globe in small amounts and effect our health.) Nuclear facilities release radioactive Iodine 131 into the atmosphere. Iodine 131 (which can be inhaled) is heavier than natural iodine 127 and is implicated in the increasing rates we see today of thyroid cancer and other thyroid disorders [5]. The only thing that protects our bodies from this radioactive isotope (Iodine 131) is having adequate amounts of iodine 127 (naturally found in seaweed) Besides protecting against radioactive iodine, testing has shown that seaweeds also help remove radioactive strontium from the body [6]. Following this line of thinking, it may also be very valuable in people undergoing radiation therapy, as it may decrease side effects and increase recovery speed.

Estrogen levels are rising higher and higher in individuals due to higher levels of xenoestrogens from ones diet and chemical exposure. Alaria has been shown to favorably alter both estrogen and phytoestrogen levels in the body. [8] In addition to helping return hormone levels to normal, it could also play a role in helping to prevent breast cancer in post menopausal women. Any women or men with increased estrogen levels or altered hormonal balance should consider taking Alaria.

Algin is a great binder of heavy metals from the GI tract [9]. We don’t find it as effective as Takesumi supreme as an all round systemic detoxification agent (except in cases of radiation toxicity, for which it is superior) but it can complement Takesumi in removing toxic metals and chemicals (those well versed in applied kinesiology can use testing to determine which product is a priority in a given patient). While it isn’t as strong a detoxification product as Takesumi, it does have a higher nutrient profile, and many patients will benefit from taking both.

Fucoidan is an anti-inflammatory component of alaria. It is an immune stimulant [10], but more important, it can speed up the healing response after physical traumas (and surgery) [11]. Fucoidan breaks down into fucose, a natural sugar found to have receptor sites on human cells, suggesting it is an essential nutrient.

Brown seaweeds such as alaria also have been shown in studies in Japan to help us excrete dioxins and PCB’s more effectively [12]. Alaria can help prevent reabsorption of toxins (metal and chemical) in patients with “leaky guts”.

To summarize: Alaria is a superb source of nutrients, especially organic iodine and trace minerals, but other nutrients as well. It is moderately anti-microbial, an excellent protector against subclinical (as well as acute) radiation poisoning, as well as metal and chemical toxicity. It has some anti-cancer properties as well as being anti-inflammatory. Anyone suffering from high Thyroid stimulating hormone, or simply low thyroid hormone should consider taking Alaria. It also should be considered when trying to restore hormonal balance in men and women.  Being a “superfood” there are many more intangible benefits that may be realized beyond the scope of this short article.

For detoxification, metal and chemical chelation, and radiation protection, let your physician recommend an optimal dose.. It is well tolerated by sensitive patients, and is (in our opinion) the best source of micro minerals for these type of patients.