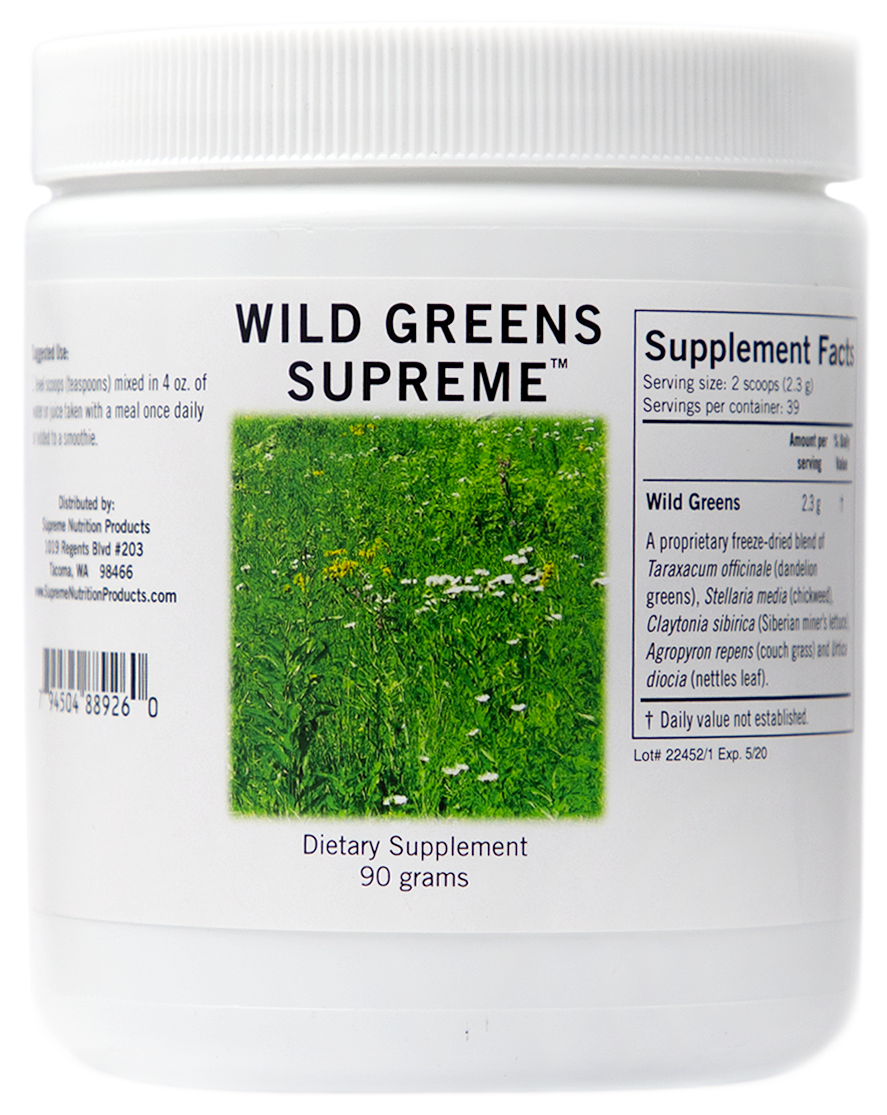 Wild Greens Supreme™ has been a long time in the making (approximately three years). The goal was to create a high quality green food product that consistently worked with a vast majority of patients. The herbs needed to be nutritive without being overtly medicinal so they could be consumed daily and nourish the body with a therapeutic dose of nutraceuticals and phytochemicals. They also needed to retain their nutritional integrity over time. Many samples were tested and we almost gave up many times as virtually nothing met the criteria.

Finally, a viable source was found that passed our testing. The resulting product is a combination of five herbs that are harvested in the wild, immediately frozen, then freeze-dried just prior to packaging. Freeze-drying retards the degradation of the plant’s constituents allowing the vital nutrients to maintain much longer than air-dried plants.

The contents are a blend of nettle, chickweed, Siberian lettuce, dandelion leaf, and couchgrass.

Noticeably absent are the cereal grasses (e.g. wheat and barley grass juice), various algaes (spirulina, chlorella, blue green algae, etc.), and legume foliage (e.g. alfalfa). Almost every other “greens” product on the market contains at least one of these, if not more. We didn’t want to include the grass juice from gluten containing grains to avoid the possibility of a reaction from gluten (gliadin) sensitive individuals. We excluded the algae because of the risk of excitotoxins and toxic metals and possibly other factors. I have been evaluating various algaes for approximately twenty years and have yet to find one that works well on the majority of patients I see. There is some doubt as to whether alfalfa is a suitable food for human consumption. Though it has a good nutritional profile, it is best suited for the digestive system of a horse, and even then it can be easily overdone. Cancer pioneer Charlotte Gerson found that alfalfa and certain other legume sprouts and grasses can encourage or aggravate auto-immune conditions which are becoming more and more common in the civilized world (1).

Wild Greens is rich in minerals, both macro and trace. The minerals are far more bioavailable than what is found in most supplements due to the fact that plants convert the inorganic form of the minerals (rock dust) into an ionic form that is easily assimilated. The greens contain ample electrolyte minerals (calcium, magnesium, sodium, & potassium) to supply the body with alkalizing material to help maintain the proper pH of the blood and other body fluids.

Also in significant amounts are vitamins A, C, & K; fiber, and free form amino acids. Not to be overlooked are the phytonutrients such as flavonoids that also play important roles.

One of the best features of greens is their chlorophyll content. Chlorophyll is a remarkable molecule responsible for photosynthesis - the ability of a plant to convert sunlight into carbohydrates for its own use. In the human body, chlorophyll promotes tissue regeneration and oxygenation, aids in detoxification, and is antimicrobial. Supplied as part of a whole plant product as opposed to an isolated component, we feel it is far more effective.

You’ve probably read or heard the quote from Hippocrates; “Let your foods be your medicine and let your medicine be your foods”. This is a foundational principle in human health, but we need to have high quality food - something that is becoming increasingly difficult in our modern world. We made Wild Greens Supreme™ to help fill that need.

Nettle is known for its ability to help hay fever, arthritis, benign prostatic hypertrophy and to be an effective anti-inflammatory (2, 3, 4, 5).

Chickweed is very nutritious and has been known to help with pulmonary disease, bronchitis, act as an antimicrobial, anti-obesity, and many other functions (6, 7, 8).

Couchgrass & Siberian lettuce also have strong nutrient profiles and will help in detoxification and overall health.

Dandelion greens have a high nutrient profile, are anti-inflammatory, and hepato-protective (9, 10).

As a general health promoting supplement/food, we recommend two level teaspoons daily mixed in 4 oz. water or juice taken with a meal once daily. Better yet, add it to your smoothie. On extremely toxic individuals twice daily is preferred.

Wild Greens Supreme should be an extremely healthful addition to everyone’s diet. There is no product like this on the market and, due to the wild crafting and freeze drying, it will never be mass marketed to the public. We are extremely happy to make this available to our customers.