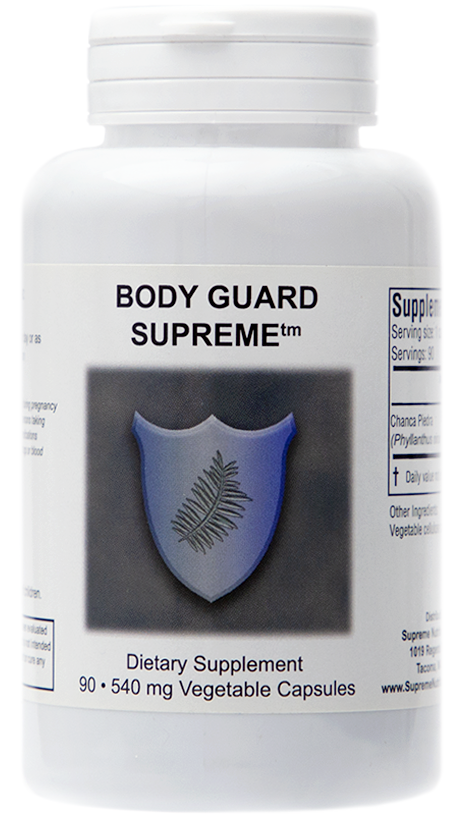 Each capsule of BodyGuard contains 500mg of pure Phyllanthus niruri with no added fillers, binders, excipients, etc. There are well over 50 published studies on the therapeutic effects of this herb and for hundreds of years it has been used throughout South America, Central America, Africa, and Asia as a traditional treatment for many conditions.

BodyGuard appears to be an excellent liver detoxifier and helps protect against carbon tetrachloride induced liver mitochondrial damage [1].  For people sensitive to caffeine and/or chocolate due to liver detoxification issues, BodyGuard can be used to help against liver stress and increase natural anti-oxidants [2].

The International Journal of Pharma and Bio Sciences says regarding Phyllanthus Fraternus/niruri (BodyGuard) “Its main uses are for treatment of many types of biliary and urinary conditions including gall stones and kidney stones, hepatitis, colds, flu, tuberculosis, viral infections, liver diseases, anemia, and for bacterial infections such as cystitis, prostatitis, venereal diseases and urinary tract infections. The plant is employed for numerous other conditions such as colic, diabetes, malaria, dysentery, fever, pain, tumours, vaginitis, gonorrhoea and dyspepsia. The plant also expels worms, intestinal gas and acts as a mild laxative” [3].

In 1990 at the Paulista School of Medicine in Brazil it was shown that phyllanthus promoted the elimination of kidney stones and is sold today in pharmacies throughout that country for that purpose. Phyllanthus Niruri has an inhibitory effect on kidney stone formation, and could be used as a preventative for those prone to develop stones, or to help decrease the growth of stones in those with pre-existing ones [4]. It also changed the shape and size of pre-formed stones, making them smaller and smoother, which then can be easier to pass. [5]

It has diuretic properties and is shown to help lower blood pressure [6]. It also increased in vitro clotting time and bleeding time in rabbits, similar to heparin or aspirin. Strokes are often due to both thrombus formation and oxidative stress, making Phyllanthus unique in its ability to help with both pathways [7].

Mice studies showed it can help reduce damage during chemotherapy and radiation and it increased the life span of mice with liver cancer by 65% [8]. Initial studies have shown it to possess anti-malarial activity [9]. In addition anti-babesia compounds are present and many clinicians use it when treating Lyme and its co-infections [10].

Phyllanthus has been shown to alleviate muscle-mediated pain and used in the treatment of chronic musculoskeletal pain syndromes such as fibromyalgia [11].

In office research and testing done by an Applied Kinesiologist indicate BodyGuard as having strong protective abilities against Electro Magnetic Field (EMF) exposure. Many patients with EMF sensitivity have responded well from taking BodyGuard. The effect appears to be from strengthening the organs that are stressed by EMF’s

Dosage: For my patients I have recommended one cap 3x/day if they have EMF sensitivity and one cap 1-2x/day as a possible preventative once the issues subside. Traditional pharmacies in South America recommend as high as 4-6 caps twice daily when treating kidney stones (I have never done this and it shouldn’t be done in lieu of other treatment). For patients taking it as a liver detoxifier we recommend 1 cap 3x/day or 2 caps 2x/day.

Contraindications: To be safe I would not prescribe it during pregnancy as with most other herbs. Because it can lower blood pressure and blood sugar, patients on anti-hypertensive drugs (also beta-blockers and other heart medications) or blood sugar lowering drugs may need careful monitoring or adjusting of the doses of their medications or you may not want to prescribe BodyGuard for these patients or patients on blood thinners. It may also be contra-indicated in severely hypo-glycemic patients.

Are EMFs Hazardous to Our Health?
http://www.lauralee.com/news/emfhazard.htm

BRIEF SYNOPSIS OF THE DANGERS OF EMF’S
http://www.equilibrauk.com/emfnewinfo.shtml