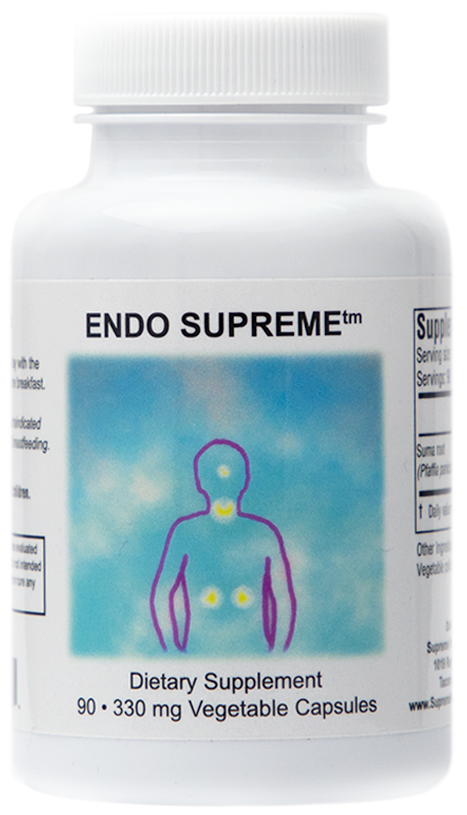 Endo Supreme contains pure powdered Pfaffia paniculata, also known as suma. The goal in developing this product was to find an herb that was strengthening and healing to the endocrine system. We view it as a master endocrine adaptogen, helping both hypo and hyperadrenia as well as many other endocrine imbalances as well as a host of other conditions [1]. Our physicians have never found great results using glandulars and have been looking extensively in the plant kingdom for broad spectrum remedies and healing agents. Suma appears to help with not only adrenal issues, but also with other hormonal/endocrine issues including helping the pituitary gland, thyroid gland, pineal gland, reproductive organs, and the pancreas.

There is much scientific research on Pfaffia paniculata. To just give you an idea of properties reported from its traditional use: it is known to increase libido, to treat impotence, PMS, menopausal symptoms and fatigue (both chronic and acute). It is used as a muscle relaxant, an anti-inflammatory, general tonic, anti-arthritic, for hypoadrenia, and as an immune support. It helps anemia (including sickle cell anemia) due to its high iron content, and diabetes by lowering blood sugar levels when needed [2, 3, 4, 5, 6]. It is also shown to have anti-neoplastic, chemo-preventive, and anti-angiogenic properties in multiple forms of cancer including liver and breast, among others [7, 8].

In patients with irritable bowel syndrome (IBS) and other bowel disturbances Suma has been shown helpful in decreasing intestinal inflammation, reducing multiple blood markers of inflammation in testing [2].

In addition to increasing libido, Studies have shown suma to help sexual performance in rats of those who were sexually sluggish/impotent [9]. Steroid hormones including testosterone have been shown to increase after taking suma for 30 days [10].

Due to its anabolic properties it has been used by Russian Olympic athletes to increase endurance and muscle mass without any of the negative effects of PEDs [11]. This is why in Brazil it is called ‘para toda’ (for all things).

We have found 3 caps daily to be an optimal dose in most cases, with the first dose taken before breakfast. In some patients results have been within days though the literature suggests it can take a month before effects are felt. Many people report that their stamina continually increases, the longer they take it.

There are no known contraindications or side effects though as with all herbs, I would exercise caution during pregnancy and have patients report any adverse reactions to you immediately. Even though there are many studies of suma having anti-cancer properties, due to its hormone modulation it is not advised to take it if you have a hormone dependent cancer.