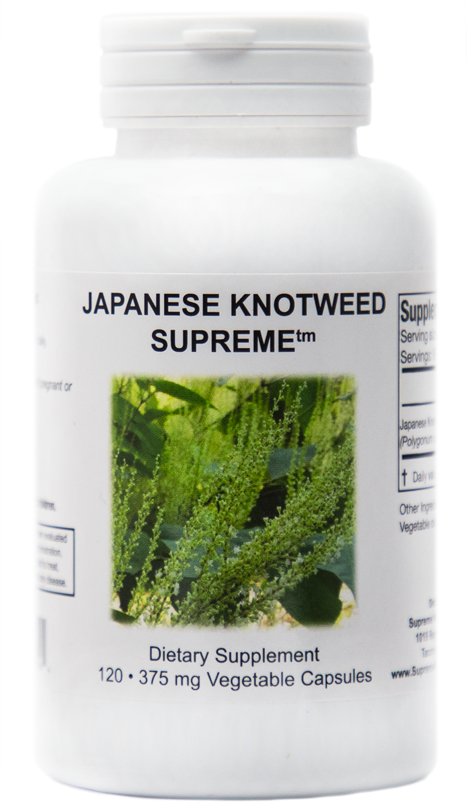 Japanese Knotweed (Fallopia japonica, or You Ji Hu Zhang in Chinese) is native to eastern Asia. It is most famously known for containing high amounts of resveratrol. Unlike foods like grapes or drinking wine, Japanese Knotweed contains mostly trans-resveratrol, which is the form best absorbed and used in ones body. Resveratrol is a type of phenolic compound called stilbenes and acts as an antioxidant. Japanese Knotweed also contains other beneficial components such as emodin, flavonoids (including rutin and quercetin), oleanolic acid, etc.

At Supreme Nutrition Products we believe that whole plants (not an extract) often work better than extracts that alter the normal ratios found in nature. Resveratrol is the main and best known component of Japanese Knotweed, but as shown in studies below, there is great synergy between the components of Japanese Knotweed, which have benefits that either isolate does not possess
on its own.

One of the most studied benefits of resveratrol are its benefits with reducing cardiovascular disease. It has been shown to decrease low-density lipoprotein–cholesterol oxidation and platelet aggregation as well as having antiatherosclerotic and vasorelaxation action (1). New studies have also shown how it can induce autophagy and regenerate myocardial ischemic tissue treated with stem cells. In a study on rats, resveratrol decreased inflammatory cell infiltration, decreased and cardiac fibrosis (2).

With resveratrol being a known anti-inflammatory, it has been looked at to help with arthritis. A recent study showed resveratrol suppresses apoptosis and inflammatory signaling through its actions on the NF-κB pathway in human chondrocytes (3). Also it has been shown that resveratrol is an effective inhibitor of chondrocyte apoptosis in vitro by Inhibiting IL-1β–Induced stimulation of caspase-3 (4). Similar to taking a non-steroidal antiinflammatory drugs, it inhibits COX-2–derived prostaglandin E2 synthesis (5). Injection of resveratrol into the knees of those suffering from osteoarthritis showed that it might protect cartilage against the development of experimentally induced inflammatory arthritis (6).

Resveratrol has also been shown to potentially help with Alzheimer’s, liver disease, age induced cognitive decline, macular degeneration, neurodegenerative disease, Parkinson’s disease, and multiple sclerosis (7, 8, 9, 10,11, 12, 13). Studies have even shown it to cause similar benefits in the body as when undergoing calorie restriction therapy (14).

Japanese Knotweed itself has been shown to be a potent antimicrobial, including against drug resistant bacteria. In one study it showed complete inhibition of pathogen growth and did not induce resistance to the active components (15). It has also been shown to inhibit streptococcus mutans and streptococcus sobrinus, potentially helping with dental plaque formation and subsequent dental caries formation (16). Multiple components of Japanese Knotweed were shown to synergistically work against Influenza A virus, including H1N1 (17). Emodin, one of the active components of Japanese Knotweed has been shown to inhibit Epstein Barr Virus (EBV) replication as well as Coxsakievirus virus. (18, 19). Studies have shown it to be very effective against Propionibacterium acnes biofilm (20).

Due to these properties some of the top Lyme Literate Doctors in the field have called Japanese Knotweed the most important herb in regards to helping those with Lyme Disease.

Warnings: Do not take during pregnancy or while breastfeeding. Consult your physician before taking if on any prescription blood thinners. Discontinue use two weeks before undergoing surgery.

3. Shakibaei, Mehdi, et al. "Resveratrol suppresses interleukin-1β-induced inflammatory signaling and apoptosis in human articular chondrocytes: potential for use as a novel nutraceutical for the treatment of osteoarthritis." Biochemical pharmacology 76.11 (2008): 1426-1439.