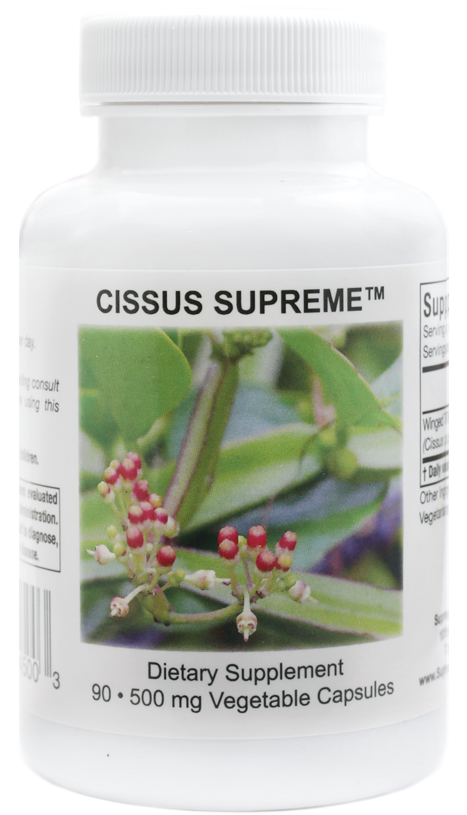 Cissus Supreme is a plant medicine derived from the whole herb of Cissus quadrangularis. Cissus is a perennial plant in the grape family and is found throughout Africa, tropical Asia, India and Arabia. In Thailand it is one of the most commonly used medicinal plants. Traditionally Cissus has been used to promote bone and tissue healing, relieve pain, promote weight loss, decrease joint inflammation, treat lung inflammation, and treat infections. Cissus contains a rich array of phytochemical including sterols, flavonoids, stilbenes, iridoids, triterpines, gallic acids, quercetin and resveratrol[i][ii].

Current research on Cissus has shown powerful effects in healing bone fractures and treating osteoporosis. Human trials have shown Cissus to have significant effects on helping weight reduction. Additionally, Cissus has been shown to significantly reduce pain, specifically bone pain. Cissus has also shown to have a variety of metabolic benefits including lowering cholesterol, triglycerides and blood sugar[iii]. In one double blind, placebo-controlled trial the group receiving the Cissus extract had decreased waist circumference, body mass index, and decreased fat[iv][v].

Cissus has been shown to have powerful effects on cartilage. Treatment with Cissus has shown the ability to protect chondrocytes from cell death and enhanced their growth and proliferation.  Cissus was also shown to lower both the cytokines and matrix metalloproteinases known to cause cartilage and bone destruction[vi].

Extracts of Cissus have been shown to have significant antioxidant effects and potent anti-cancer effects specifically against leukemia cell lines[vii].

Cissus has been shown to have gastro-protective effects, countering the mucosal damage induced by aspirin intake[viii].

As an antimicrobial agent, Cissus has been shown to have antibiotic effects against Gram-positive bacteria, including Bacillus subtilis, Bacillus cereus, Staphylococcus aureus, and various Strep species.

Cissus was shown to have significant liver protective effects, both decreasing lipid peroxidation in the liver and increasing hepatic antioxidant levels[ix].

Like many of the products we offer at Supreme Nutrition, Cissus has a broad spectrum of clinical application. First and foremost, we consider Cissus to have anabolic potential, specifically with building and stabilizing all tissues, but more specifically in bone loss or injury to bone. Cissus has the potential for assisting other slow healing tissues like cartilage and ligaments as well. Additionally, it can be very instrumental in helping manage musculoskeletal pain. Beyond that it should be strongly considered in metabolic syndrome and diabetes, as well as high cholesterol and has marked effects in the GI tract as both a gut healer and antimicrobial agent.

Cissus differs from LuRong in that it does not contain glucosamine, chondroitin or IGF-1. Lu Rong tends to have more an athletic enhancement ability, whereas Cissus seems more to help with regeneration of bone, decreased joint pain, and decreased weight, body mass index, and fat.

Contraindications: Cissus is a very safe herb with no adverse effects noted[x]. However, there is limited data on Cissus in pregnancy and breastfeeding and so best to avoid.