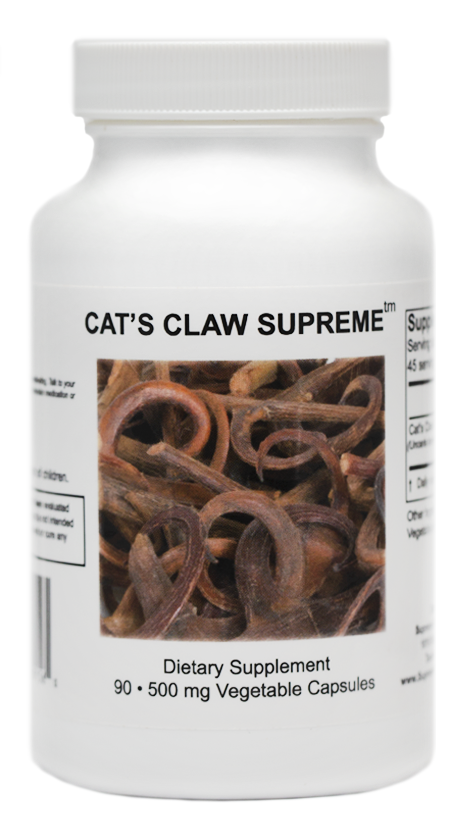 Cat’s claw, also known as Uncaria Tomentosa, is a woody vine that is native to Central and South America particularly in the Amazonian Rainforest. It has been used for medicinal purposes for centuries dating back to the Inca Civilization. Indigenous shamans say it is a bridge and balancer between the physical and spiritual worlds and is considered the most sacred herb. The herb is rich in alkaloids, terpenoids and flavonoids, which contributes to its historical use to help a wide range of symptoms and conditions. These conditions traditionally include but are not limited to arthritis, cardiac issues, Alzheimer’s, cancer, diverticulitis, ulcers, colitis, gastritis, leaky gut, hemorrhoids, and a variety of infections (viral, fungal, bacteria, parasitic and spirochetes).

The following are the most common modern uses of Cat’s claw:

1.      Cat’s claw is one of the most potent antimicrobials in nature. It has demonstrated its strong effects against Lyme (1) and co-infections (babesia, bartonella), viruses (especially EBV and the herpes family) (2)(3), bacteria (Staph, Strep, Enterobacteria.) (4), fungus (chronic Candida infections) (5), and parasites. It is for this reason that we view it as a broad spectrum antimicrobial. This is one of the properties that gives it its reputation as an immune stimulant along with it increasing WBCs and NK cells. One of the NK cells that it increases is known as CD 57, which is known to be deficient in Lyme Disease. Due to the herbs antibacterial properties, PANDAS is a condition that many functional medicine doctors have been using cat’s claw for along with tooth infections and UTIs. A recent study from 2021 also showed that cat’s claw inhibited the release of SARS-COV-2 infectious particles and reduced the cytopathic effect caused by the virus (6).

2.      The uses for different types of inflammatory bowel conditions like Crohns, IBS and UC most likely stem from the positive effect cat’s claw has on inflammatory markers like NF-KB. Cat’s claw has shown potent antioxidant properties and the ability to turn down NF-KB in studies (16). Interesting to note is that the herb also inhibited LPS induced iNOS gene expression and nitrite formation.

3.      Many studies have shown the effectiveness of Cat’s claw on osteoarthritis and Rheumatoid arthritis. This is not only due to the NF-KB being inhibited but also IL-1, IL-4, IL-17 and TNF-alpha (7). A 2001 study with 45 subjects suffering from osteoarthritis allowed researchers to conclude “pain associated with activity, medical and pain assessment scored were significantly reduced within the first week of therapy” (8).

4.      More recently, studies have been done and show the herbs ability to combat certain forms of cancer. The most studied have been breast cancer and leukemia. The British Journal of Hematology felt that the alkaloids pteropodine and uncarine F were especially impressive in the leukemia studies (9). A more recent study in 2015 also founds that cat’s claw can be extremely beneficial by improving quality of life and fatigue levels in advanced cancer patients (10).

6.      DNA repair has been one of the more recent interests in cat’s claw. A 2001 study showed significant improvement in DNA repair for people who had undergone chemotherapy (13). Furthermore, a 2006 study showed that cat’s claw should be considered as a natural sunscreen due to the ability to repair UV light damaged skin cells (14).

One big controversy to clarify is the buzz around the TOAs (tetracyclic  oxindole alkaloids) and POAs (pentacyclic alkaloid) in cat’s claw. The claim is that TOAs disrupt the function of the nervous system and down regulate the POAs. However, master herbalists have disproven this claim. One says that the study that all of this was based on isolated only two of the five naturally occurring TOAs in cat’s claw. This led to the two TOAs extract amount far exceeding the levels that are found in the plant in its natural form and way unnaturally potentized due to the purification process. This was also done in vitro only and never in humans. On the contrary, the overwhelming majority of research in the last 25 years has been using the whole plant, which has never demonstrated the claim of the TOAs down regulating the POAs. In fact, “This naturally occurring POA-TOA-containing herb has been successfully used for a very long time by these indigenous peoples to enhance immune activity. Additionally, the herb has been successfully used in clinical practice with thousands of people for over half a century in South America to enhance immune response. The herb itself, without any fiddling around, will work exceptionally well, especially for Lyme disease” (17).

In conclusion, cat’s claw should be view as a potent antimicrobial that can help against chronic infections that patients have been struggling to overcome. This, along with the powerful anti-inflammatory and immune boosting properties that the herb possesses, should be a great addition to your patient’s protocols.