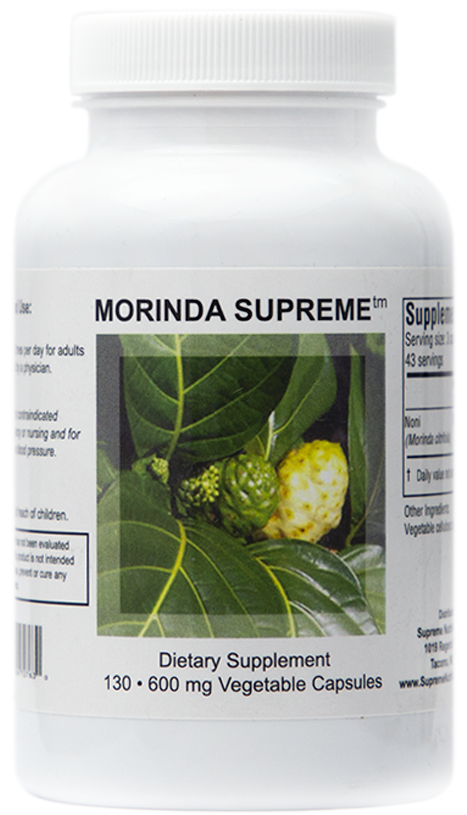 Morinda Citrifolia, also known as noni, has been used for hundreds of years throughout Polynesia for a variety of conditions.

Morinda Citrifolia has been reported to help in a plethora of issues. It has been shown to be immune system modulating, anti-cancer, anti-diabetic, a strong antimicrobial and to enhance cognitive abilities, etc. While it has many beneficial properties it is most widely used for it’s antimicrobial and immune modulating properties, and is used by thousands of doctors across the world for this purpose.

One of the many factors that make Morinda so effective is its ability to act as a broad-spectrum antimicrobial, and just not against one certain type of microbe.

Morinda has anti-microbial properties against many species of bacteria, fungus, virus, and parasites. One recent study showed it to work against E.coli, Staphylococcus aureus, Candida albicans and Aspergillus niger [1, 2, 3,4]. Morinda also works against Mycoplasma, including: Mycoplasma pneumoniae, Mycoplasma penetrans and Mycoplasma fermentans [5].

Studies have shown taking Morinda Citrifolia causes an increase in the phagocystosis of pathologic bacteria in addition to activating CD4 and CD8, and increasing immune function [6]. While doing this it also acts as an immune stimulant by activating IL6 cells and stimulating B and T Lymphocytes, demonstrating both its cellular and humoral immune stimulant properties [7, 8, 9]. When treating stomach ulcers the results suggest that Morinda Citrifolia possesses significant antiulcer properties which could be due to the cytoprotective action of the herb and/or strengthening of gastric and duodenal mucosa with the enhancement of mucosal defense [10]. Other studies also show Morinda to be an effective antimicrobial against Helicobacter Pylori, a major factor in peptic ulcers [11].

Many folk remedies talk about Morinda being used for arthritis and new studies now show how Morinda Citrifolia can act as a Cox-2 inhibitor, which can result in decreased inflammation and an alleviation of arthritic pain [12]. It has also been used to treat certain skin disorders in folk medicine and new research has shown it to potentially help protect the skin from UVB-induced injury [13].

Similarly, Morinda has been used to help diabetes and research has now shown that Morinda has multiple active components that act to lower ones blood sugar [14]. In addition to lowering blood sugar levels, it also significantly reduces  wound healing time in diabetics [15].

A novel new use of Morinda could be taking it post surgery since it has an antiemetic property and can help prevent postoperative nausea in patients [16]. It also has been shown to have mild blood pressure lowering properties by causing vasodilation of blood vessels [17].

Morinda has an anti-jugular vein thrombotic effect and a possible additive antithrombotic effect without the induction of thrombocytopenia [18]. It also protects the brain from stress-induced impairment of cognitive function and that this protective effect may be related to improvement in stress-induced decreases in blood vessel density in the hippocampal dentate gyrus [19]. These mechanisms are two ways that have been proposed for the beneficial affects of giving Morinda to those suffering from ADHD. In addition to ADHD some studies have shown it to help with drug and other addictive characteristics [20].

Morinda has been shown to increase dopamine and serotonin, which could help alleviate depression. It has been used as a folk remedy for depression for hundreds of years, and this is a potential mechanism behind why it has traditionally helped [21]. In folk medicine Morinda is given in some cultures to help with epileptic seizures, and the above-mentioned increases in serotonin and dopamine could explain its beneficial effects [22].

In clinical practice one unique property of Morinda is that it inhibits the suppression of cell-mediated immunity by immunosuppressive substances. It also inhibits the reduction of IL-2 production and activated Natural Killer Cells [23]. This could be a way to help stimulate the immune system in patients that are on immune-suppressive drugs such as prednisone or cortisone.

Morinda has potential anticancer and antitumor activity against many forms of cancer including Lewis lung carcinoma, cervical cancer, and others [24, 25, 26]. The mechanism works by multiple pathways including prevention of carcinogen-DNA adduct formation and antioxidant activity [27]. It has also been shown to cause the inhibition of new blood vessel networks to help prevent tumor growth [28]. For those on chemotherapy is has also helped protect the body from the side effects of chemotherapy [29].

Women who are pregnant or breastfeeding should not take Morinda as a precautionary measure. Some reports show that those with hyperkalemia should not take Morinda due to its high potassium content, though the amount of potassium per capsule is quite low. This may apply more to drinking noni juice but caution is still advised. Since Morinda has been shown to mildly lower ones blood pressure, one should carefully monitor his or her blood pressure if hypotensive before starting to take Morinda.

Many physicians use Morinda Supreme not only for treating acute and chronic infections, but recommend it prophylactically when under stressful situations or traveling to areas where mold and other pathogens are common.

We recommend taking it with meals if possible. A very small percentage (<5%) of people taking report minor stomach discomfort if they take it without food on an empty stomach, but report no issues taking it with food.

What Makes Morinda Supreme different from other noni products ?

There are many claims to how effective noni is, but in practice many physicians report not seeing it being very beneficial for their patients.

1) Much of the noni (in juice form) on the market is greatly diluted with other fruit juices to mask the taste, weakening the potency.
2) Most noni on the market has been put through a fermentation process that they feel enhances the product (but clinically we often see the opposite).
3) Most noni is either in pasteurized juice form or a capsule combining the leaves and fruit (We believe the raw powdered fruit without the leaves is the best form).
4) Much of the Hawaiian noni is grown downwind of Kilauea volcano and we believe this could be contaminated with toxic materials that are in the vog (volcanic fog). We believe this could possibly be true for some sources from the Big Island.

These are four of the biggest reasons why many people taking noni get mixed results, but thousands of MDs, DOs, DCs, NDs, LAC, etc. have reported impressive clinical changes with using Morinda Supreme.

8. Nayak, Smita, and Sushma Mengi. “Immunostimulant Activity of the Extracts and Bioactives of the Fruits of Morinda Citrifolia.”Pharmaceutical Biology 47.3 (2009): 248-54. Web.