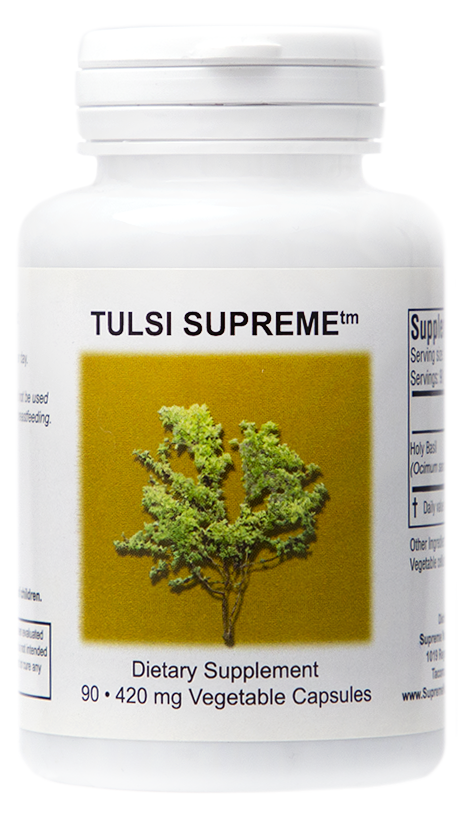 Tulsi Supreme™ is the powdered herb Ocimum sanctum, also known as holy basil. It is indigenous to India and southeast Asia. This herb has been cultivated in India for approximately 5,000 years and has been one of the most revered herbs used for physical, emotional and spiritual balance and healing. In general it has many uses: it is a very potent adaptogen that helps fight stress (including stresses like noise pollution, along with physical, cardiac, and emotional stress) and is one of the best adrenal supports available (animal studies show it can lower elevated cortisol levels) (1, 2, 3, 4). Studies have also shown it to help reduce both anxiety and depression (5).

In one study taking Tulsi for one month caused a significant reduction in fasting blood sugar, uronic acid, total amino acids, total cholesterol, triglyceride, phospholipids and total lipids (6). It is a broad spectrum antimicrobial (contains eugenol which is also an antimicrobial that exists in cloves), acts as an immunostimulant, reduces uric acid levels (has been used in kidney stone treatment), and acts as a mood stabilizer (normalizes neurotransmitter levels) (7, 8, 9, 10). Tulsi has Cox 2 inhibiting properties and thus is a potent anti-inflammatory agent (11). It also works to reduce edema and has anti-arthritic properties (12).

It has been used as part of a cancer treatment protocol as it discourages new blood vessel growth to tumors, as well as protects healthy cells from side effects of chemotherapy and radiation (13, 14). It has also been shown to be hepatoprotective for various chemicals including acetaminophen and is a potent antioxidant having been shown to increase SOD and glutathione levels if needed (15, 16, 17).

We evaluate Tulsi on all patients but find it most useful when patients have a stressful lifestyle and need adrenal support, though it is also part of our antimicrobial armamentarium.

Because of its strong adrenal restorative properties, depending on genetics, some people only need a very small dose, 1 cap daily, while others may need up to 4 daily (one cap 4x/day). You may want to start low and increase as needed.

It has no known side effects but, as with most herbs, caution is advised during pregnancy. It may be contraindicated in people with severe hypoglycemia or those on blood thinning medications.

7. Prakash, P., & Gupta, N. (2005). Therapeutic uses of Ocimum sanctum Linn (Tulsi) with a note on eugenol and its pharmacological actions: a short review. Indian journal of physiology and pharmacology, 49(2), 125.