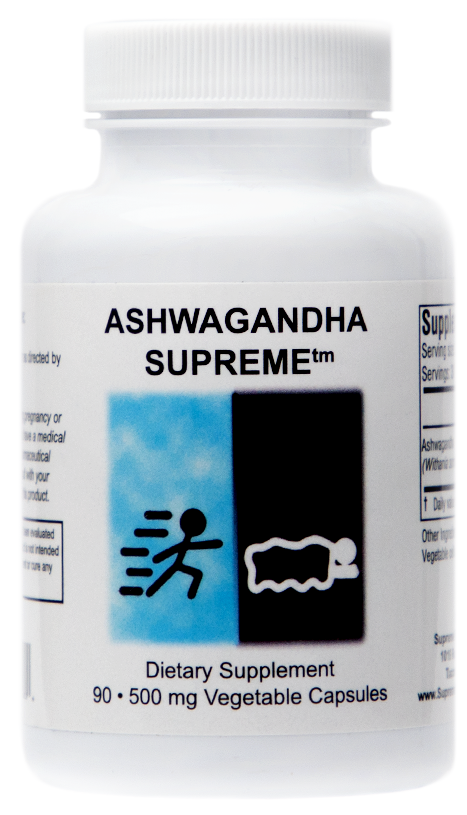 Ashwagandha (Withania somnifera) is an adaptogen working on the endocrine system and the Hypo-Pituitary-Axis (HPA). The Sanskrit implies it gives the user the strength and stamina of a horse- with some doctors saying that taking it in the morning will allow you to run 20 miles while taking it at night will allow you to sleep like a baby. I am sure that is an exaggeration (at least in my case), but you get the idea.

It is most well known to decrease fatigue [1], allow you to handle stress more effectively, increase strength and stamina, increase libido, improve memory and clarity [2], and produce restful sleep when needed [3]. The various conditions it has been used for include arthritis (it is anti-inflammatory) [4, 5], chronic lung condition, [6] immune deficiency [7], hypertension [8], autoimmune problems [9], hypothyroidism [10], and many others.

With ashwagandha being an adaptogen, it is said to be an extremely effective anti-stress herb. Research on mice has shown it to increase both endurance and speed while swimming, and increase muscle mass. This study shows ashwagandha may be used for both anti-stress activity as well as anabolic muscle growth [1]. By inhibiting NFκB cells, ashwagandha can lower stress and help those suffering from cystic fibrosis [6].

For patients on immunosuppressive drugs ashwagandha may act as an adjunct to minimize the side effects and increase ones immune response when needed. Studies show patients on ashwagandha while on immunosuppressive drugs showed decreased myelosuppression, and an increase in hemoglobin concentration, red blood cell count, white blood cell count, platelet count, and body weight. An immuno-stimulatory effect was also observed [7].

Animal studies have shown it may be useful in treating drug-induced dyskinesia [11]. In one animal study, ashwagandha increased brain levels of superoxide dismutase, catalase and glutathione peroxidase [12]. This could easily be the mechanism of how it improves cognition, memory and perhaps longevity. The increased superoxide dismutase can be used to break down histamine, helping reduce allergy symptoms. Other studies have shown it increases acetylcholine receptor activity, stimulates the growth of axons and dendrites and has GABA-like activity [13, 14]. In most cases we prefer it to GABA because it is a “whole natural food” and has many complementary properties.

In clinical practice we find it especially useful in patients under increased stress, or with sleep problems, cognition issues and/or various neurological imbalances. It does overlap EndoSupreme™ to some extent though we tend to view Endo more as an endocrine system restorer while ashwagandha effects anti-oxidant levels as well as various neuro-transmitters. Many physicians use it as their first choice to support the adrenal glands. This is an oversimplification and both products should be evaluated on every patient.

Contraindications: Because ashwagandha can lower blood pressure (acting as a calcium channel blocker) and blood sugar I would be careful in prescribing it to diabetics and people with hypotension (since it is an adaptogen, it will probably be OK though we suggest you monitor the patient). It should not be used during pregnancy or in patients with active peptic ulcers. I would not prescribe it to patients on sedatives. I have not been able to find any cases where side effects actually occurred yet these precautions make sense based on the physiology of how it performs. It is in the nightshade family so monitor patients you give it to who have known nightshade sensitivities (many nightshade sensitive patients tolerate ashwagandha very well).

Our recommended dose for Ashwagandha Supreme™ is between 1-3 caps daily.

2. Shah, J.s., and R.k. Goyal. “Investigation of Neuropsychopharmacological Effects of a Polyherbal Formulation on the Learning and Memory Process in Rats.” Journal of Young Pharmacists 3.2 (2011): 119-24. Web.

18. Dongre S. Efficacy and Safety of Ashwagandha (Withania somnifera) Root Extract in Improving Sexual Function in Women: a double-blind, randomized, placebo-controlled study. The electronic version of this article is at: http://www.harmonyforwomen.com/clinic als/ksm.pdf.