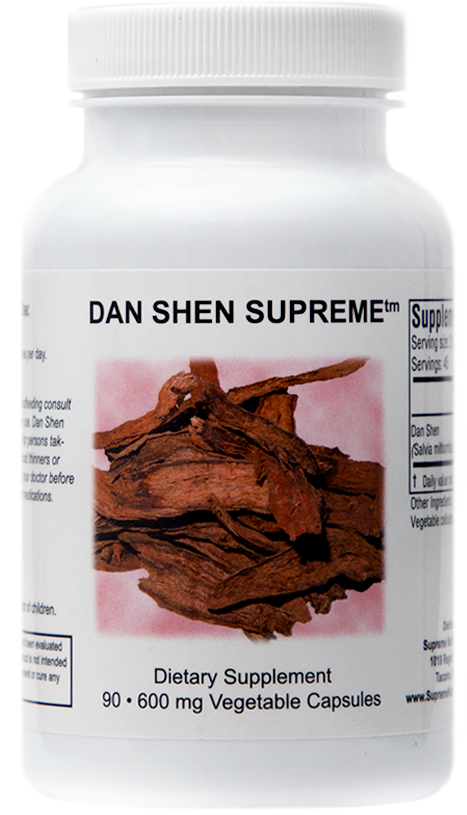 Dan Shen, also known as red sage or salvia miltiorrhiza, has been used in oriental medicine to treat many disorders and ailments for thousands of years. While Dan Shen has many uses, treating cardiovascular and cerebrovascular disorders are the most common things it is used for. These cardiovascular disorders can include recovering from a myocardial infarction, treating an acute ischemic stroke, hypertension, and inhibiting platelet adhesion in those prone to hypercoagulative disorders.

Patients with mild to moderate hypertension (high blood pressure) can benefit from Dan Shen. A recent study showed that taking 2,000 mg per day over 12 weeks reduced both the patients’ systolic blood pressure as well as pulse rate [1].

A clinical study of 300 people with angina pectoris took Dan Shen and their symptoms improved in 82% of the people, including ECGs improvements in 50%. This supports a previous study of 323 patients with angina where 20.3% had remarkable improvement and 62% had moderate improvement while taking Dan Shen [2].

For patients who aren’t on prescription blood thinners Dan Shen has the potential to help as a natural blood thinner. Research has shown it to work in multiple pathways including inhibiting platelet aggregation, interfering with the extrinsic pathway of blood coagulation, possessing anti-thrombin III like activity, and also promoting fibrinolytic pathway [7]. By acting on many different pathways at once Dan Shen may be the best all natural way to maintain healthy blood flow and help prevent blood clots and associated issues. Via similar actions studies have shown it to help with diabetic retinopathy [8].

While Dan Shen is most often used for its cardiovascular properties studies have shown it potentially work as an anti-cancer agent and also against HIV. When administered to human colon adenocarcinoma cells it was shown to both inhibit growth and induce apoptosis of the tumor cells [9]. Experimentation of HIV cells showed Dan Shen to inhibit viral replication of HIV cells [10].

In traditional Chinese medicine Dan Shen is used on patients with liver issues. It is one of the most commonly used herbs for liver disorders and can also help treat Hepatitis B Virus in addition to stimulating increased liver activity [12] [13].

The broad applications of Dan Shen make it a welcome addition to your patient with cardiac, coagulation, and hepatic issues as well as being anti-fungal and anti-bacterial.

Patients taking blood thinners such as warfarin should avoid taking Dan Shen due to an exaggerated effect of the warfarin and increased risk bleeding of bleeding. As a precaution Dan Shen should not be taken while also taking NSAIDS or other blood thinners. You should also not take if on digoxin and consult your doc if on other heart medications. Do not take during pregnancy.