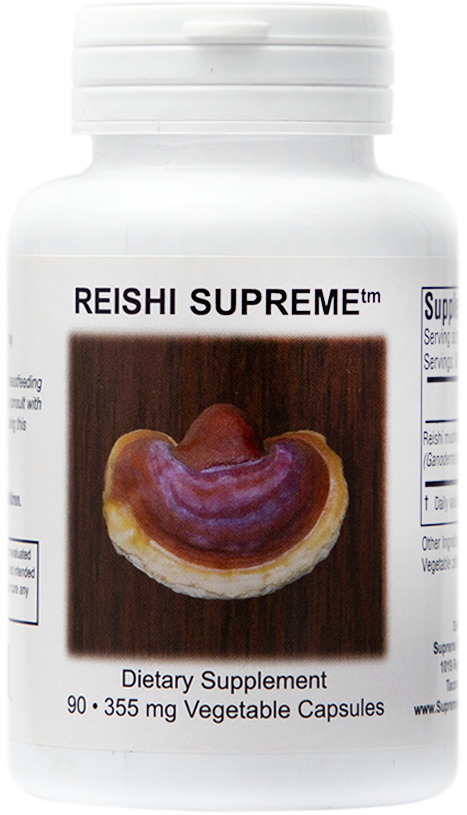 Reishi (Ganoderma lucidum) has been used in the Far East for approximately 4,000 years. In China it is called Ling Zhi (mushroom of immortality). Historically, it has been used as a longevity herb to treat kidney disorders, liver disorders, bronchitis, asthma, gastric ulcers, fatigue, insomnia, heart disease, cancer, and dizziness, as well as to prevent altitude sickness [1, 2, 3, 4, 5, 6, 7]. The bioactivity is due to the polysaccharides (over 100 types including beta-glucan), triterpines, proteins, sterols, minerals (including germanium) and fatty acids [8, 9].

There have been many studies on Ganoderma showing it to be antimicrobial (specifically antibacterial against H. pylori and certain species of Klebsiella), and antiviral, including anti-HIV [10, 11, 12, 13]. Our clinical tests have also found it useful at times for fungal and parasitic issues [14, 15]. Reishi also exhibits the following properties: chemoprotective, anti-inflammatory, hepatoprotective, anti-oxidative [16, 17,1, 18]. Like Morinda, BodyGuard, Endo, Melia, and LuRong, the clinical applications are very broad and we evaluate it on every patient as it has the potential to be health restorative for many.

In addition to working against H. Pylori research also indicates that the oral administration of Reishi for 2 weeks caused a significant acceleration of ulcer healing by between 40.1% and 55.9%. In addition it also suppressed or restored the decreased gastric mucus levels and increased gastric prostaglandin concentrations compared with the control group. These results indicate that Reishi has healing efficacy on acetic acid-induced ulcers in rats, which may help with the prevention and treatment of peptic ulcers [3].

Its antitumor effects have been studied extensively both as a single standing product and in combination with other herbs and chemotherapy agents. It also lessens the negative effects of chemotherapy and radiation [19]. Other trials show it to activate T-cells and certain cytokines, especially IL-2, as well as macrophages [20, 21]. In one study it caused an 81.2 % decrease of tumor volume and tumor mass [22].

Other studies show how Reishi suppresses tumorigenesis and inhibits tumor growth through direct cytotoxic effect and anti-angiogenic actions. This is possibly due to its immunomodulatory, anti-angiogenic, and cytotoxic effects. Reishi affects immune cells and immune-related cells including B lymphocytes, T lymphocytes, dendritic cells, macrophages, and natural killer cells [23].

Reishi can also act as a mast cell stabilizer, leading to an inhibition of histamine release [24]. It has been effective in lowering elevated cholesterol levels as well as blood pressure [25]. In addition to increasing HDL (good) cholesterol, it also has an anti-diabetic effect, lowers insulin resistance, and can lower plasma insulin levels [26].

New research suggests that G. lucidum extract inhibits scratching and relieves allergic itch through a peripheral action [26]. This could potentially help those who are prone to bug bites, including against mosquitoes.

Reishi also protects the hippocampus from oxidative impairment and helps benefit factors involved with spatial learning and ones memory, and also protects against severe damage of hippocampal neurons [27].

Not only is Reishi not contraindicated in patients with fungal issues, but it can help them get over it. Clinical research suggests it can minimize the toxic effects of methylxanthine ingestion (caffeine, theobromine in coffee, tea, chocolate, etc) and should be given to those that consume moderate to large amounts of these substances.

Dosage is between 1 and 2 caps 3x per day depending on the severity of the condition. It works well in combination with all the other Supreme Nutrition products and also as a stand if none of the other products are indicated.

The only potential side effect we know of is that it can have an additive effect involving the inhibition of platelet aggregation for people already on blood thinning medications so they may need less of the medication (or not take the Reishi).

Similar to LuRong and Ashwagandha, mushrooms have been used in traditional medicine for thousands of years. While they have been used traditionally and sound quite impressive, many physicians have found inconsistent results when using them in clinical practice. Going through much research, clinic experiments, and consultation with herbalists we were able to find a type of Reishi, which performed well both academically and clinically on patients.