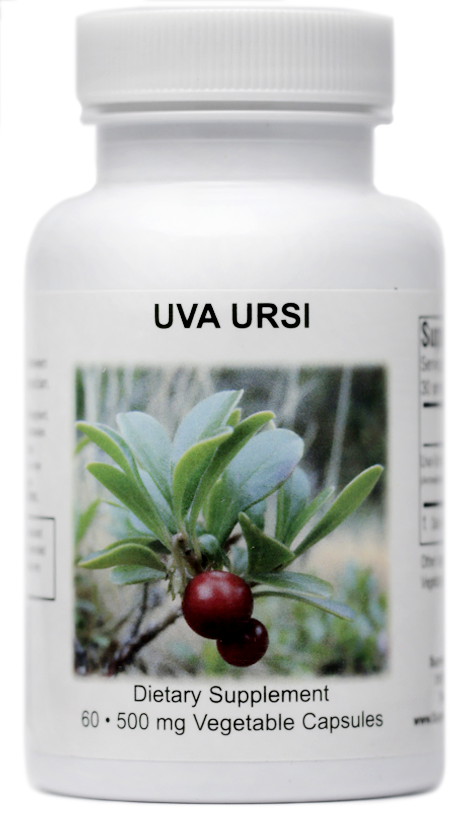 Uva ursi (Arctostaphylos uva-ursi), or bearberry, is a flowering alpine herb in the blueberry family with a long history of use in European and western herbalism. The leaves are the part used for medicine and have been traditionally used for urinary tract infections. The dried leaves historically have been used boiled or steeped in water to form a tea, however, powdered encapsulated products have been safely used since the 1970’s[1].

The first documented use of Uva ursi in literature appears in the 13th century in a Welsh medical text. The herbal remedy was more used in northern areas of Europe before coming into more widespread used in central Europe. By the middle of the 18th century, Uva ursi was widely used in Europe and by the beginning of the 19th century it was considered an “official medicine”. Historical uses include treatment of kidney stones, diabetes, gonorrhea, edema, urinary tract infections, and as a diuretic.

Research has shown that Uva ursi has strong direct antimicrobial activity[2].  In regard to its use in treating urinary tract infections, Uva ursi has been shown to prevent UTIs even in high-risk populations[3][4]. Uva ursi leaves have been shown to be inhibitory against Staphylococcus aureus[5] and can exert a pro-oxidative effect on E. coli and also chelate iron, which causes the bacteria to be more susceptible to destruction[6]. Uva ursi leaves have been shown to inhibit growth of Neisseria gonorrheae, the causative agent of the STI gonorrhea[7] and has exhibited antimicrobial activity towards a variety of organisms including Mycobacterium smegmatis, Shigella sonnei and Shigella flexeneri[8]. Extracts or Uva ursi have been shown to be active against Acinetobacter baumanii[9] and H. pylori[10]. Uva Ursi inhibited the growth in vitro of Bacillus subtilis, Escherichia coli, Pseudomonas aeruginosa, Salmonella typhimurium, Serratia marcescens and Staphylococcus aureus[11] Klebsiella pneumoniae, Candida albicans and Mycobacterium phlei[12].

Uva ursi has been shown to have antiviral activity in vitro against Herpes simplex virus type 2, influenza virus A2 and vaccinia virus[14].

Regarding its traditional use for kidney stones, research has shown Uva ursi to have an inhibitory effect on calcium oxalate kidney stones by 95%[1] Clinical testing has shown uva ursi to be helpful to help clear the body of oxalates which can be implicated in various pain syndromes and other issues.

The main active chemical constituent of Uva Ursi is Arbutin which makes up 7-17% of the dry weight of the leaves. Methyl arbutin makes up at least 4%. Arbutin readily hydrolyses in the body to form hydroquinone which has potent antimicrobial properties[2]. Aside from this, arbutin has been shown to have antioxidant and anti-inflammatory properties inhibiting TNF-alpha and Il-6[3]. Topically, both arbutin and hydroquinone have been used to lighten the skin[4][5]. Other notable constituents of Uva ursi include tannins (10-20%), methylhydroquinone, anthocyanadins, salicylic acid, quercetin derivatives, and allantoin[6].

Safety: Uva ursi extracts have been shown to be very safe. In animal models fed 25 mg/kg/day crude uva ursi extract for 90 days, no pathologies were observed[7]. High dose and long term use is discouraged due to some of its strong components. We recommend not taking more than one bottle without taking a break of at least 1-2 months.

Cautions/Contraindications: Not recommended for pregnancy or breastfeeding. Not recommended in those with retinal diseases, kidney or liver pathology. Caution in children.

Suggested Dosing: 1-2 capsule(s) twice daily or as directed by your health care practitioner

16. Arbutin [CAS No. 497-76-7] and Extracts from Arctostaphylos uva-ursi Supporting Nomination for Toxicological Evaluation by the National Toxicology Program January 2006