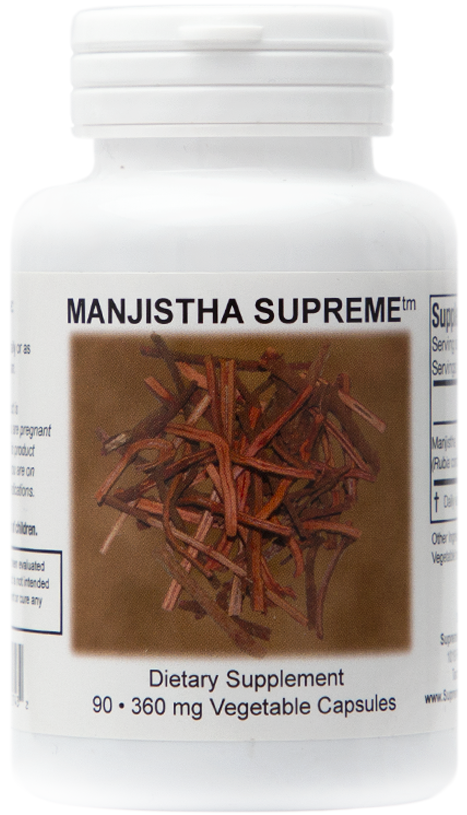 Manjistha Supreme™ is a plant medicine derived from the roots of Rubia cordifolia.  Manjistha grows in Southeast Asia, China, tropical Africa, and India. It contains a variety of quinones, iridoid glycosides, triterpinoids, and beta-sitosterol.

Research has shown its efficacy as an antioxidant, muscle relaxer, anti-seizure, and anti-anxiety remedy. The herb has also been shown to be an immune stimulant; one trial demonstrated an increase in white blood cells by 151%.

Manjistha is a supreme Lymphatic tonic. It has a long history of being used in India to treat disorders of the lymphatics. Often patients with fungal dysbiosis and/or mercury toxicity have problems with lymphatic drainage; Manjistha works well with these patients to clear the problems and enhance circulation. Manjistha is also very anti-inflammatory for musculoskeletal problems and has been used historically to treat anything from bumps and bruises to rheumatoid arthritis [1]. It has also been used in cases of inflammatory digestive problems such as Peptic Ulcer, Crohn’s Disease and Ulcerative colitis. There is some good research on Manjistha preventing serious allergic reactions to foods and it is it used for inflammatory skin conditions like acne, vitiligo, and eczema. Manjistha may also be very useful in excessive-bleeding conditions like heavy menses, nosebleeds, and bleeding from trauma.

Manjistha seems to be very well absorbed in the GI leading us to think of it loosely as a more bioavailable version of turmeric (though a different plant).

Manjistha is considered to be the most renowned blood-detoxifying herb in Ayurveda. Manjistha has been used traditionally as a liver and kidney detoxifier. Manjistha also seems to be quite useful in treating anxiety [1].  This action may be in part due to its ability to raise dopamine levels. Historically it was used to help dissolve tumors as well as help broken bones to heal.

As an antimicrobial, Manjistha has shown activity against bacteria [2] as well as against viruses, particularly HIV virus. Additionally, Manjistha has been shown to have significant antioxidant activity [3]. Manjistha has also been demonstrated to have antitumor activity in one study.

Like most of Supreme Nutritions products the broad spectrum applications of this herb are very impressive. We tend to think of it mostly as a lymphatic drainer and an anti-inflammatory for the musculoskeletal and gastrointestinal systems as well as an anti-anxiety herb but we test it on everyone because of the other applications too. The herb is very safe. Manjistha was traditionally given to women with threatened abortion up until the last trimester of pregnancy, and so is generally considered safe in pregnancy. Manjistha contains some cardiac glycosides that exist in foxglove (where digitalis is derived from). We wouldn’t recommend manjistha to patients already on this type medication. The toxic dose has been found via research in rats to be above 175g/kg. It is generally recommended not to exceed 30 grams per day[2].

*It should be noted that Manjistha may temporarily turn urine orange or brown.