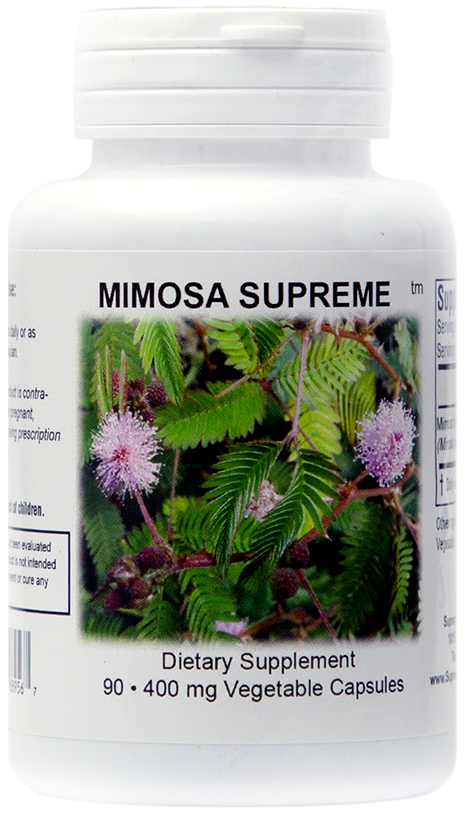 Mimosa Supreme is pure powdered Mimosa Pudica in a veggie cap. Like all other Supreme products there are no fillers, binders, flow agents or other substances added in the encapsulation process. Mimosa, also known as the sensitivity plant, has been used for thousands of years for medicinal purposes, especially in Ayurvedic Medicine. Traditionally, this plant has been used to combat many health challenges due to the beneficial phytochemical presence of terpenoids, flavonoids, glycosides, alkaloids, quinines, phenols, tannins, saponins, and coumarins. These uses include but are not limited to the following:

1) As a broad spectrum anti-microbial mimosa demonstrates effectiveness against Aspergillus fumigatus, Citrobacter divergens, Plasmodium berghei, and Klebsiella pneumonia in studies (6). Clinically, physicians have reported it to be effective in treating various parasites as well as various forms of Borrelia (14). According to a few physicians that have used mimosa for a number of years “many patients experience elimination of parasites into the toilet so they have to be informed prior to starting the herb” that visible parasites are a possibility (14).

2) Mimosa is the go to herb for Hemorrhoids in Ayurveda. This is due to the amazing wound healing abilities of the methanolic extracts of the plant. Traditionally the powder has been made into a paste and applied topically but oral supplementation can be effective as well.

3) Anti-diarrheal activity was demonstrated on rats that were given castor oil induced diarrhea and PGE2 induced enteropooling along with reducing gut motility after a charcoal meal. The ethanolic extract of Mimosa showed significant diarrhea inhibition (7).

6) Analgesic and anti-inflammatory activity has been demonstrated due to the flavonoid presence in the ethanolic extract.

8) Anti-ulcer activity was demonstrated against pylorus ligation, aspirin and ethanol-induced ulcers due to the plants ethanolic extract (11).

9) Mimosa does possess anti-convulsant activity, specifically for drug-induced seizures. It also demonstrated to be an antagonist for N-methyl-D-aspartate induced turning behavior (13).

To quote Fagenholz: “In conclusion, Mimosa possesses great medicinal properties. It seems to benefit the majority of patients with microbial issues. However, we do view it as an elite anti-parasitic due to its action on large intestinal worms. This herb needs to be considered in any resistant parasitic or microbial patient cases and in all patients that test positive for Borrelia” (14).

Dosage: The dosage is 2 capsules in the morning and 2 before bed on an empty stomach ideally. Some sensitive patients may experience discomfort and need to start at a lower does. However, we have had some of the most sensitive patients not have any discomfort at all so we advise to just monitor your patients.

Contraindications: Mimosa should not be taken during pregnancy or while nursing or in children under 6. As with other supplements children’s dosage should be determined by weight.