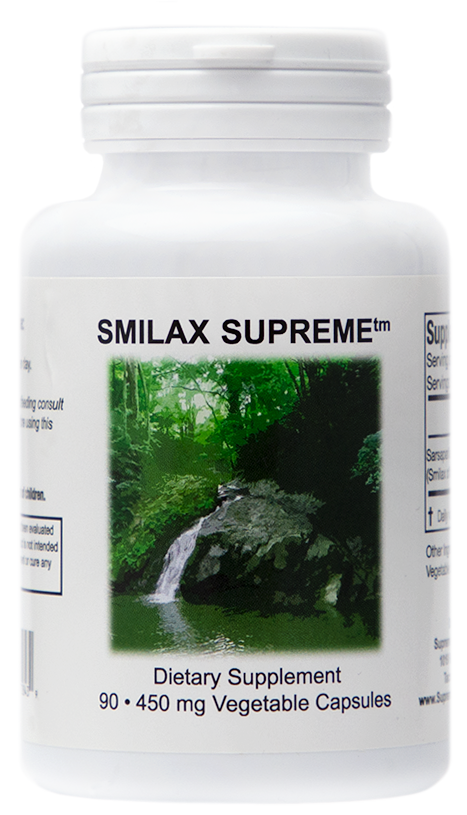 Smilax Supreme comes from the root of the plant Smilax officinalis which is a small vine that grows throughout Central and South America. This herb has been used for centuries for many purposes. Over the years it has been traditionally prescribed for the following conditions: psoriasis, arthritis, autoimmune diseases, detoxification, hormone regulation, and as a general tonic and blood purifier (1, 2, 3, 4, 5). It has historically been used to treat syphilis, gonorrhea, and other STD’s since at least the early 1800’s as well as for leptospirosis (6).

Back in 1942 the New England Journal of Medicine reported on Smilax’s effectiveness in treating psoriasis (7). Psoriasis as well as many other diseases such as inflammatory bowel disease, various liver disorders, pancreatitis, periodontal disease, coronary artery disease, arthritis and asthma are believed to have endotoxins as a possible causative component according to many researchers. One of the main components of Smilax is sarsaponin, which has been found to be an effective endotoxin binder .This is thought to be the reason it has been so helpful in treating psoriasis as well as so many other symptoms/conditions (8). Since endotoxins can alter the manufacture of cytokines and eicosanoids, endotoxins can be very pro-inflammatory and have a vast number of effects, mostly negative (9).

Smilax is anti-inflammatory and can help with nephrotoxicity by increasing anti-oxidative defense activities (10, 11). Studies have shown how Smilax may help against colon cancer cell proliferation (12). New research has also shown how Smilax helps reduce oxidative stress due to lead toxicity in rats (13).

Other research has shown how Smilax helps protect the liver against hepatitis and other injury. In the study it inhibited the elevation in transaminase activity, reduced the TNF-alpha production, and improved the histological changes, including inflammatory infiltration, hepatocyte necrosis and degeneration and Kupffer cell hyperplasia (14).

Other components of Smilax, specifically some of the flavonoids, have been shown to be hepatoprotective (15). We see Smilax filling an important niche in our work. Many alternative medicine physicians find that many of our chronic patients suffer from a variety of sub-clinical “infections” of bacterial, fungal, parasitic, viral, and spirochete origins. These “infections” can cause many symptoms effecting the derma, gastro-intestinal tract, respiratory system, etc. etc.

Many of the symptoms can arise from the endotoxins, mycotoxins, etc. produced by these microbes. An herb with the potential to bind many of these toxins can be of much benefit to speed up resolution of the patients’ complaints. We already know of a number of natural plants that have strong anti-microbial properties but few that are noted for their endotoxin and possibly mycotoxin binding properties.

As with most of our products, we evaluate this on most if not all patients. It may show up initially or it also may not show up until dysbiosis is resolved so the body can focus more on endotoxin reduction. We see its greatest uses as:

2) As a broad spectrum antimicrobial itself, including as a possible anti-spirochete agent (borrelia, babsesia, etc.) While the research hasn’t been done yet, its effects in treating syphilis suggest its possible usage for other spirochetes as well.

4) It has been traditionally used to increase libido and hormone balancing so you might want to investigate it in those areas (16).

5) It is also theorized that it increases GI absorption of other herbs and acts as an aid to the bioavailability of substances.

There are no know side effects though as with most herbs there is always a slight risk of gastro-intestinal irritation or nausea in very sensitive patients. There are some theories on the Internet that it should not be taken with Digitalis glycosides or bismuth containing medications like Pepto-Bismol or SF734.