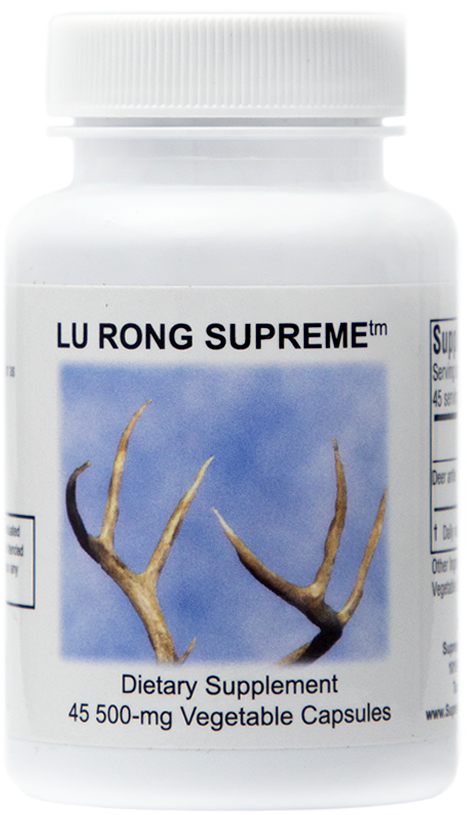 Lu Rong Supreme™ is composed of deer or elk antler. Our selection of which batch and supplier to use depends on our testing both with applied kinesiology as well as clinical testing on patients. This type of testing eliminates over 90% of the products we consider adding to the Supreme Nutrition Products line as we only want to offer products that both test and perform optimally. It is then encapsulated with nothing else added.

It is harvested without harm to the animal and is a whole food product rich in minerals as well as many other phytonutrients. It has been used in oriental medicine for over 2,000 years.

Applications appear to be as follows (many of these have been reported on antler that was harvested at an earlier stage than LuRong Supreme but our patients have reported the same benefits):

1) It contains chondroitin sulfate as well as glucosamine sulfate, and hyaluronic acid. Unlike isolated extracts of those 3 substances, it has the necessary co-factors (fibroblasts, chondroblasts and more) etc. to optimize repair of cartilage and connective tissue. It also is not derived from shellfish (as many of these products are), which has the possibility of heavy metal and other contamination. Most of the collagen in Lu Rong is type II. Type II production is usually diminished in both osteoarthritis and rheumatoid arthritis and supplementation has been shown to increase strength, as well as decrease inflammation, pain, swelling, and stiffness. It also can be useful in decreasing the auto-immune reaction in these type degenerative processes. Lu Rong as a result can be thought of as being chondroprotective and possibly restorative too. It should be tested on all arthritics and anyone with a family history of arthritis.

2) Lu Rong may have a small amount of IGF-1 (insulin growth factor-1 or IGF-1). IGF-1 encourages absorption of glucosamine and chondroitin. Research suggests IGF-1 may also help prevent osteoporosis and improve muscular development. It also promotes bone growth. To quote Wikipedia “IGF-1 is one of the most potent natural activators of the AKT signaling pathway, a stimulator of cell growth and multiplication and a potent inhibitor of programmed cell death. Almost every cell in the human body is affected by IGF-1, especially cells in muscle, cartilage, bone, liver, kidney, nerves, skin, and lungs. In addition to the insulin-like effects, IGF-1 can also regulate cell growth and development, especially in nerve cells, as well as cellular DNA synthesis.” IGF production is stimulated by HGH which decreases as we age and thus we also end up with an IGF-1 deficiency. Taking Lu Rong may help correct that deficiency.

4) Lu Rong is a source of gangliosides. Gangliosides provide cells with distinguishing surface markers that can serve in cellular recognition and cell-to-cell communication. They may also protect against neuro-degenerative diseases.

5) Lu Rong is a source of anti-inflammatory prostaglandins (not just the precursors) and can be helpful in all inflammatory conditions including headache prevention and treatment.

6) Lu Rong is a natural source of Pantocrin. According to Russian and New Zealand research, Pantocrin increases athletic performance (including increased speed and increased strength) as well as speeding recovery from intense physical activity. Pantocrin has also been shown in animal studies to hasten recovery from whiplash injuries. It also helps with lactic acid removal from muscles after exertion and helps speed recovery of injured muscle tissue and nerve tissue (Japanese study).

7) Studies have suggested it has a rejuvenating effect and is anabolic in the sense that it helps burn fat and builds muscle tissue.

8) Other studies suggest that Lu Rong may increase testosterone production leading to an increase of lean body mass and also an increase in endurance. As a result, it has traditionally been used to increase libido in men and women, to help erectile dysfunction, decreasing pre and post menopausal symptoms and increasing fertility. Lu Rong may contain small amounts of testosterone, estrone, luteinizing hormone and another hormone similar to progesterone.

9) Lu Rong is an immune stimulant and is reported to increase the effectiveness of chemotherapy drugs as well as reducing kidney damage from chemotherapy.

10) In Korea, it is used during the last trimester of pregnancy to enhance the chances of a smooth and easy delivery and it can also help lactation. It also has been used traditionally to increase growth in children and help in babies with delayed walking. There are no known contraindications during pregnancy or lactation.

11) Studies in Korea show that it can increase red blood cell production when needed.

13) It also can inhibit MAO enzyme function and act as a mood enhancer.

15) Nutritionally it is a rich source of calcium hydroxyapatite as well as other macro minerals, trace minerals, and all essential amino acids.

A wonderful book by Betty and Paul Kamen called The Remarkable Healing Power of Velvet Antler (out of print but one can get it through Amazon) has a lot more information. Another book entitled Velvet Antler by Alison Davidson also has much research and is worth reading.

As far as applied kinesiology findings and personal clinical observations I found the following.  It is not unusual for Lu Rong to block weakening responses to microbe composite vials (it is immune enhancing), positive endocrine NL’s and occasionally metals. It is not as strong in those areas as our other products but is very health supporting in many ways. We used it to successfully treat a positive response to the parasite composites in a pregnant woman. Other patients have reported sounder sleep, increased libido and decreased headaches. Because it is a food it may take awhile to build up in some patients to feel the changes while others may feel the difference quickly.

To summarize main indications- I would suggest Lu Rong for any case of physical trauma (car accidents, athletic injury), anyone wanting to increase endurance and athletic performance, inflammatory conditions, arthritis and cartilage degeneration, osteoporsis, osteopenia, nerve degeneration, sexual dysfunction and most people interested in slowing the degree of onset of aging. I look at it as a whole food. Back before hybridization when people ate whole foods, many of them wild (including animals in some cases), there were small amounts of natural hormones and co-factors in the daily diet. I look at Lu Rong as restoring that part of the diet.

Most Lu Rong on the market comes in 250-500 mg per cap with fillers added. Our caps have no fillers added and as a rule is priced much lower and is of the highest quality. Our material is typically harvested at a later stage than much of the LuRong on the market. We have found that it actually tests better in this stage and performs better and allows us to keep the cost down.

Reccomended dosage: 2 caps daily as a therapeutic dose for the glucosamine/chondroitin etc. or 1 cap a day for the other effects. For small children you would adjust the dose appropriately. Feel free to share your experiences with us.

There are many books on oriental medicine which include much research on LuRong. Below are two free websites where you can view more details.