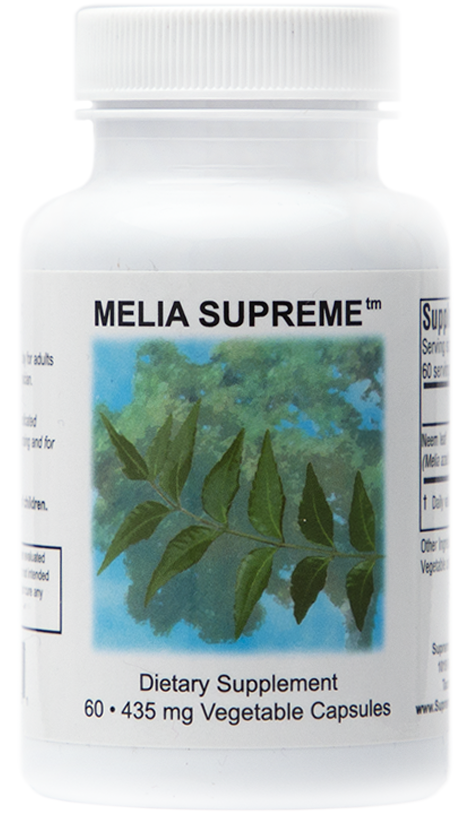 Melia, like Morinda is an amazing plant that has been used therapeutically in India for at least 2,500 years. The word neem is reported to come from the Sanskrit language and roughly means “the healer and illness reliever”. Our main reason for making melia available is that it is another superb broad spectrum anti-microbial showing effectiveness against various fungi, bacteria, parasites, virus (including herpes), and spirochetes [1]. It also works against drug-resistant bacterial infections including against both gram-positive (S. aureus) and gram negative (E. coli and P. aeruginosa) bacteria [2]. HIV positive patients with drug resistant candida were able to treat the candida by taking neem [3]. It has also been reported that it does not harm beneficial intestinal flora [4]. Melia has been shown to be hepato-protective, stimulates T-cell production in times of infection, and blocks pro-inflammatory prostaglandins [5, 6, 7]. Melia also possesses small amounts of catechin and quercetin- both having anti-inflammatory and anti-histiminic properties [8].

In Japan, Melia has been used for cancer treatment of solid tumors as well as using it topically on skin cancers [9, 10]. It has been used successfully to treat malaria as well as vitiligo, and has been reported to increase brain serotonin levels thus having anti-anxiety properties [11, 12, 13].  Melia has also been shown to lower cholesterol levels [14]. In insulin dependent diabetics, melia has reduced insulin requirements up to 50% [15]. One interesting effect is that without decreasing libido or sperm count, neem has been used effectively as a male contraceptive [16]. In parts of Africa women use it also for the same purpose (so you may not want to use it if you are trying to get pregnant). I could keep going but you can see how it merits its name “the healer and illness reliever”.

We mainly use Melia Supreme as a broad spectrum anti-microbial (AK shows it to be much better than neem oil against most microbes and is much better tolerated). In patients with many microbial infections or severe symptoms Melia can be used in conjunction with other antimicrobials from Supreme Nutrition such as Morinda, Golden Thread, etc. We feel Melia is the strongest anti-microbial in the Supreme Nutrition line.

Melia is planted in urban areas in India because it is great at adsorbing pollutants, so we have to be very careful in our source selection [17]. As with other Supreme Nutrition Products- each batch goes through AK testing for effectiveness, besides the normal “purity” tests required by the government.

Recommended dose for adults can be 1 cap 3x/day.

Contraindicated during pregnancy, nursing, and in young children.

11. Jones, I. “Sexual Development of Malaria Parasites Is Inhibited in Vitro by the Neem Extract Azadirachtin, and Its Semi-synthetic Analogues.”FEMS Microbiology Letters 120.3 (1994): 267-73. Web.

If you want further research you can read at: