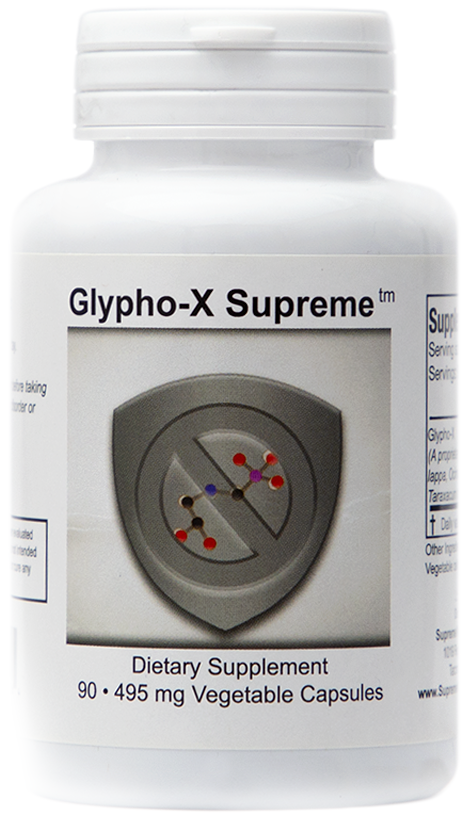 Glyphosate (Round Up) is a chemical that has been used as an herbicide since the 1970’s. Between the 1970’s and 2016 there has been a 100 times increase in its prevalence, and it is the most commonly used herbicide in the USA today. It is also routinely sprayed on many non-organic crops right before harvesting to help dry out the crops, and increase the harvest. In 2015 the World Health Organization classified glyphosate as “probably carcinogenic in humans”. Glyphosate has been linked to increased intestinal permeability (leaky gut), causing chronic acidosis and mitochondrial dysfunction, altering normal gut flora, stimulating breast cancer cell growth, kidney damage, suppressing cytochrome P450 enzymes, and many other conditions (1, 2, 3, 4, 5, 6, 7). Many food products, including some organic ones, have been found to contain high levels of glyphosate residue (8).

One study was done to see if different herbs could contribute protection against damage caused by glyphosphate. The compound contained both Taraxacum official (dandelion) and Arctium lappa (burdock), two components in Glypho-X. In the study glyphosate invoked liver cell death, but after treatment with the herbs, liver cell death decreased by up to 89% (9).

Taraxacum official (dandelion) has been shown to be hepato-protective (10, 11). One study showed taraxacum can lower total cholesterol, lower triglycerides, and increase HDL (12). Another study showed it can help prevent hypercholesterolemic atherosclerosis and lower ones risk for coronary artery disease (13). In addition to cardiovascular health taraxacum has been shown to have an anti-influenza viral effect (14). It also has antibacterial and anti-inflammatory properties (15, 16). Arctium Lappa (burdock) is plant known for its detoxification properties (17). It acts as an anti-infl ammatory by decreasing infl ammatory cytokines, IL-6, and TNF-α (18). In addition to being shown to help protect against glyphosate induced liver damage, it has also been shown to be eff ective in helping protect against multiple other types of chemical induced liver damage (19, 20, 21).

Ocimum basilicum (basil leaf) is a great detoxifier and studies have shown it to increase phase II enzyme activity, being especially helpful with xenobiotic detoxification (22). Similar to taraxacum offi cial and arctiumlappa, basil helps to protect against chemical induced liver damage (23). It also has been shown to increase memory recall due to its antioxidant, fl avonoid, tannin, and terpenoid levels (24). Studies also show ocimum to possess antiviral, antibacterial, and antifungal properties (25, 26, 27).

Dosage:
We recommend taking 1 pill 3x per day for the fi rst bottle. After that it can be taken prophylactically as needed when eating foods that may have residue of glyphosate or other herbicides/pesticides.

Please consult your physician before taking if you have a bleeding disorder, are allergic to ragweed, or are pregnant.

4. Shehata, Awad A., et al. "The effect of glyphosate on potential pathogens and beneficial members of poultry microbiota in vitro." Current microbiology66.4 (2013): 350-358.

6. Jayasumana, Channa, Sarath Gunatilake, and Priyantha Senanayake. "Glyphosate, hard water and nephrotoxic metals: are they the culprits behind the epidemic of chronic kidney disease of unknown etiology in Sri Lanka?." International journal of environmental research and public health 11.2 (2014): 2125-2147.

23. George, Saramma. "An Evaluation of the Preventive Effect of the Methanol Extract of Thai Basil (Ocimum basilicum L.) on Ethanol-induced Hepatotoxicity in Rats." (2014).