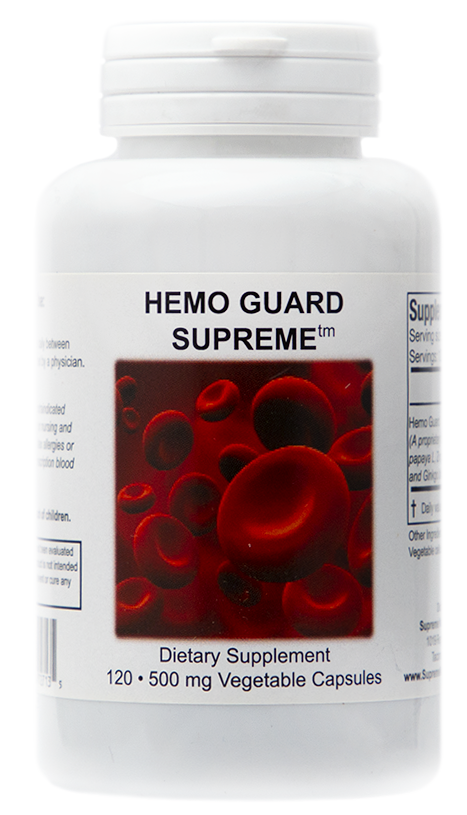 Hemo Guard Supreme™ was developed for people who may be prone to hypercoagulation. Hypercoagulation is a condition where fibrin builds up in the various blood vessels. In its extreme, fibrin deposition can lead to deep vein thrombosis, pulmonary embolisms, heart attacks, and stroke. In its less severe form it can possibly lead to phlebitis, fibromyalgia (by cutting off blood flow), I.B.S., chronic low grade infections where the microbes are “protected” by residing in the fibrin meshes, miscarriages, headaches, chronic pain, etc.

Recent research by David Berg and many others have also implicated the following in causing hypercoagulation: many forms of infection (viral, parasitic, bacterial, and fungal) as well as toxic chemicals and metals [1, 2]. The fibrin formation may be the body’s attempt to wall off the microbes.

It is theorized by some that these newer recognized causes may account for many cases of pulmonary embolisms that were previously labeled as idiopathic.

Pharmaceutical intervention can be very effective but in some people can lead to serious side effects (typically bleeding events) [3]. The drugs though can be life saving and you should follow your physician’s advice.

In less severe cases, with the consent of your physician, there are certain herbs and other lifestyle changes that can discourage hypercoagulation.

Hemo Guard is a combination of some of the more effective agents. It contains the following:

1) Ginkgo biloba: Gingko has been used for many years for memory enhancement, increased cognition, and an increased ability to pay attention [4]. One property reported in a study in China is that it is a potent antagonist of platelet activating factor and thus may help prevent blood clots and hypercoagulation [5]. The World Health Organization also reported that is helpful in treating cerebrovascular insufficiency as well as peripheral artery occlusive disease [6]. Recent studies also show it acting as a scavenger of free radicals and having neuroprotective affects from hypoxia [7]. It should not be used if you are on anticoagulant therapy.

2) Ginger root: Studies at the University of Maryland suggest that Ginger has blood-thinning properties by acting as an anti-thrombotic, in addition to lowering cholesterol and being anti-inflammatory [8]. A research study conducted in Australia looked at the ability of ginger to stop or reduce platelet activation and aggregation induced by arachadonic acid in human blood [9]. They also compared and contrasted the anticoagulant properties of ginger with those of aspirin [10]. The report concluded that ginger could prevent blood platelets from adhering together. This might be due to the inhibition of the enzyme COX-1 [9]. The report also concluded that ginger compounds and the derivatives of ginger are more effective as antiplatelet agents than aspirin.

In one fascinating study on dietary effects on fibrinolysis, fibrinolytic activity decreased by 18.8 per cent after administration of fatty meal. Addition of ginger along with the fat not only prevented the fall in fibrinolytic activity but actually increased it by 6.7 per cent. As compared with the fatty meal, ginger actually increased fibrinolysis by 31.5 per cent.

Ginger has many other good properties in addition to anti-coagulation. Studies have shown consuming ginger can be a way to lower blood pressure [12]. It also contains antibacterial properties that can be used to treat microbial infections such as colliform bacillus, staphylococcus epidermidis and streptococcus viridians [13]. Ginger has also shown to help with fat digestion in addition to increasing thermogenesis and decreasing satiety (hunger), working to help with weight loss [14, 15]. This is one reason why many cultures include ginger as a spice whenever they eat fatty meals [16].

Hemo Guard should not be used if the patient is on ‘blood thinners” such as warfarin and other similar pharmaceuticals. If the patient is not on these, it may prove to be a useful tool. It may also be used to possibly prevent conditions in people who have family histories of some of the previously mentioned hypercogulation caused problems.

In many cases we see Hemo Guard helping treat microbial infections when one is on an antimicrobial regime by allowing the antimicrobials to reach the most distal areas of the body.

Other contraindications include pregnancy and latex allergies.

As with any herbal regimen, we encourage you to consult your physician to see if there is a more serious condition warranting more aggressive intervention.

DanShen Supreme also is helpful in hypercoagulation problems and should be considered as an alternative if the patient has latex sensitivities or in cases where more cardiac issues are apparent. We have used both of them successfully but would not give both simultaneously as the effect may be too strong.

Recommended Dose: 1 cap three times daily between meals. Dosage may be increased during times of acute infection to discourage hypercoagulation.