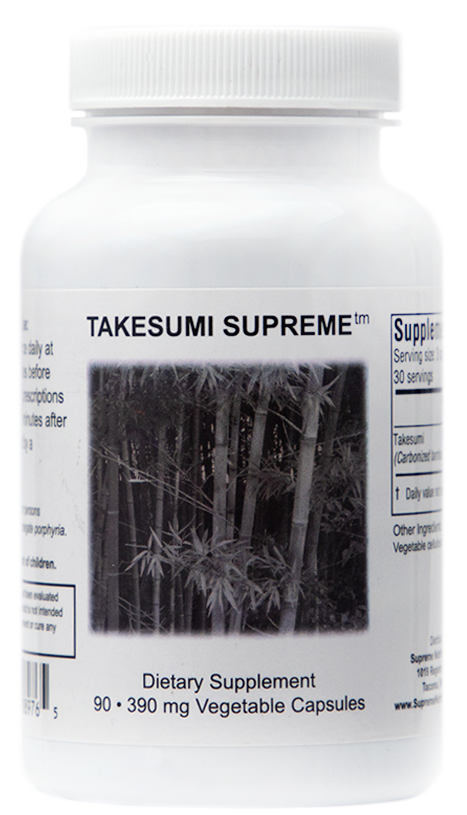 Takesumi or carbonized bamboo is well known in Japan but is just now becoming well known in the US. To put it simply- it is derived from bamboo that is carbonized under very specific conditions. Most of the literature on it is from the orient and a little hard to decipher. Many physicians have reported it working against heavy metal toxicity, chemicals, and often food sensitivities. We look at it as a supreme detoxification product. It also appears to adsorb mycotoxins and endotoxins (and other biotoxins) from various organisms, take a load off the liver and kidneys and thus act in an anti-aging fashion. It is also reported to adsorb radiation (radon, nuclear, etc.). Many of the lyme literate physicians use it as part of their protocols.

It does have anti-fungal and anti-bacterial properties but not as strong as the other Supreme Nutrition antimicrobials (Morinda, Melia, Vital Guard, Golden Thread, etc.). Because of the porous nature of the bamboo, it is an amazing absorber (up to 10x more so than wood treated similarly, according to many sources). Research from Japan claims it emits far infrared rays (thus improving circulation) as well as negative ions and shields the body from EMF’s. It also is a natural source of minerals (macro and trace) and is reported to be alkalizing.

This was a very difficult product for us to get in the quantity needed for distribution. It took many months to find a few sources (we found 6) and with clinical testing we narrowed it down to 2 potential sources that met our standards. It then took going through a lot of red tape to get the samples and find someone who would export it. Each batch is checked to be free of radiation and other toxins.

We are making it available in powder form. It is tasteless and dissolves adequately in water so it is not difficult to take. We recommend everyone take it periodically (approximately twice weekly for the average person) for detoxifi cation- some people for longer periods at a time, and some for shorter depending on their degree of toxicity and exposure to environmental contaminants (past and present). We have seen people need it daily for weeks to months at a time. It should also be taken whenever you have been exposed to a food or chemical you are sensitive towards, as it will hopefully shorten the severity and duration of the reaction. Many patients suffer from a degree of cognitive impairment and loss of coordination when eating a food he or she is sensitive to.

For many, Takesumi aborts the reaction and returns them to normal quickly.

While there is not much human medical research on the uses of Takesumi, there are studies showing how absorptive it is, and how it can bind up heavy metals. Studies have shown it to be effective in binding mercury, lead, cadmium, and other heavy metals (1, 2, 3, 4). It has also shown to be effective at binding aflatoxins(5).

Dosage:
Powder: A dose is 2 scoops taken one time per day. It should be taken at least 30 minutes before food, pills, or prescriptions or at least 90 minutes after.

Capsules: A dose is 3 pills taken at once (equal to approximately 2 scoops). It should be taken at least 30 minutes before food, pills, or prescriptions or at
least 90 minutes after.

In Japan and other far eastern countries, they add it to specialty breads (they claim it is a cancer preventative), soba noodles and even coffee and tea as they feel it does not adsorb nutrients but actually imparts them to the food, making it more healthful. It does not affect the taste. Some also use it as tooth powder to whiten the teeth.

Contraindications:
The only possible contraindication we know of is not to take it if you have been diagnosed with variegate porphyria.